Castle Rock, Colorado is the most populated municipality in Douglas County with a booming population of over 55,000 residents. Located halfway between Denver and Colorado Springs, Castle Rock has grown significantly over the last 5 years with expansions of the Castle Rock Outlets and a new Castle Rock Adventist Hospital.

Castle Rock lies a few miles east of the Rampart Range of the Rocky Mountains on the western edge of the Great Plains. Castle Rock, the butte that is the town’s namesake, sits just north of the town center. Other prominent landforms visible from Castle Rock include Dawson Butte, Devils Head, Mount Evans and Pikes Peak.

The city of Castle Rock is bustling with activity from those who work and play in and around the area. While many residents make the short 20-minute commute to tech jobs near the Denver area, others stay closer to home and serve in the tourism, mining and manufacturing industries. 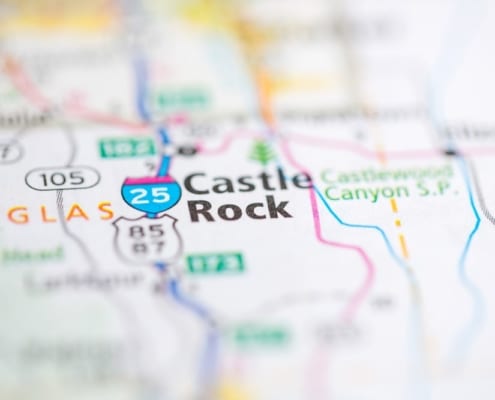 Castle Rock’s cost of living is higher than some similar-sized cities which is partially due to its geographic location the Denver. This city may as well be a suburb of the major metro area and tends to trend higher in price-points but also higher in quality of life for many.

The “Open Space” forest lands and parks are a main attraction for visitors and residents alike. Families will appreciate the playscapes that the Castle Rock community have built and the ziplines. Adults will likely be happy to know there are plenty of breweries to frequent in Castle Rock.

Part of what makes Castle Rock such a desirable place to call home is its location, access to both small town and big city amenities, outdoor recreation and multi-layered economy. The median home price is $472,000, and residents can expect to pay more than $3000 in property taxes annually. The area is popular among family, but the market is a bit cooler than other surrounding Colorado cities.

Electricity Service – Start or stop service at this link.

Events Calendar – Get notified or learn more about events in and around Castle Rock.

What’s Going on in Castle Rock?

We’re with you from start to finish as we help point out details and talk you through the major systems of the home. We are licensed, certified and ready to show you what a top-notch home inspection experience should be like so you can make a confident and informed decision.

Extremely knowledgeable and will not let you buy a house without knowing what you need to know! Their insurance plan is extremely helpful. Our family highly trusts Drew and his crew and they helped us make one of the best decisions of our lives.

I’m one that appreciates people that show up to appointments on time. Brodie arrived earlier than we did and we were at the house 15 mins before our scheduled time. The inspection was very comprehensive. It took us 3 hours to go through the entire house inside and out. He pointed out things I would have never seen on my own. We learned a lot about the house and have a clear understanding about what we’re walking in to. I feel good about the investment we’re making so the cost of the inspection was well worth it for us. Thank you, Brodie!

I honestly cannot be any happier with AmPRO Home Inspections. Where do I even begin, I am so grateful I found them. Everything was more than amazing with them. Awesome price and I mean awesome! I loved that i was able to get a Complete inspection from the same company, I needed Mold, Lead Paint, Asbestos, sewer in addition to the general and Radon home inspection and they were able to do it all and save me a ton of headaches and money! They even got me an appointment in 2 days notice! I liked that the actual owner, Drew, which I Spoke to on the phone came to do the inspection himself with his partner Brody. They arrived earlier than the scheduled time which was great, were very professional and helped me understand what they were doing since it was all new to me. Very honest people, their sewer camera broke so they called a plumber and didn’t charge me a extra penny in fact they didn’t charge me for a couple test they found out i didn’t need, did some small tests for free, and even refunded me a charge because the cost came out to less than expected so they covered it them selves. Like i said everything was amazing and more! I am so happy I chose AmPro Home Inspections, Drew and Brody are doing it right and should have a bright future with this company!! I would rate 15/10 A++++!! Keep it up guys!

Drew and Brodie did an excellent job! They were able to do an inspection on short notice, were very thourough, and took time to answer any questions I had. I highly recommend them!

Extremely knowledgeable and will not let you buy a house without knowing what you need to know! Their insurance plan is extremely helpful. Our family highly trusts Drew and his crew and they helped us make one of the best decisions of our lives.